The World We Want

Today we are 2.93 years away from the end of 2015. At the end of 2015, the world will collectively reflect on the progress made in achieving the eight Millenium Development Goals.  Here at EAHForum, although we appreciate that all MDGs are inter-linked, we are particularly interested in MDG4 (reducing childhood mortality), MDG5 (improving maternal health), MDG6 (combating HIV/AIDS, malaria and other diseases) and MDG8 (providing access to affordable essential drugs in developing countries).

The 2012 report also highlights rapid progress in specific targets of MDG6 i.e. the proportion of individuals with advanced HIV who have access to antiretrovirals. Furthermore, countries such as Botswana, Comoros, Lesotho, Namibia, Rwanda, South Africa, Swaziland and Zambia have already achieved universal access to treatment for HIV/AIDS i.e. greater than 80% coverage for all those that need treatment.  Data from Uganda is promising with 54% coverage in 2009 while Kenya is on track with coverage of 70% in 2009.  There has also been a significant drop in the number of new HIV infections in Sub-Saharan Africa.  In the 2012 UNAIDS report, the incidence rate of HIV infection in adults between 2001 and 2011 was reported to be stable in Uganda and decreasing in Burundi, Kenya and Rwanda with Rwanda reporting greater than a 50% reduction.

The figures above provide a limited snapshot of progress in health-related MDGs in East Africa.  Furthermore each MDG is complex as it consists of targets and indicators and up to date information is not publically available for all countries.  As we approach 2015, there is increasing dialogue about the post-2015 agenda. The UN recently launched an online civil society consultation on ‘Health in the Post-2015 Development Agenda’ with the following key themes:

1. What are the lessons learnt from the health related MDGs?
2. What is the priority health agenda for the 15 years after 2015?
3. How does health fit in the post 2015 development agenda?
4. What are the best indicators and targets for health?
5. How can country ownership, commitment, capacity and accountability for the goals, targets and indicators be enhanced?

Click on the gallery below to see what EAHForum members and friends in East Africa and in the UK had to say………. 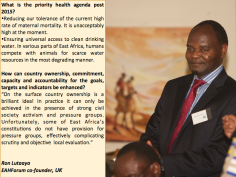 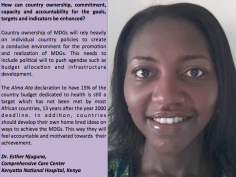 The consultation above closed in December 2012.  However, there is an ongoing ediscussion on ‘HIV, Health and the Post-2015 Development Agenda’ which runs until the 3rd of February 2013. Have your say here: The World We Want